LOUISVILLE, Ky. (WDRB) — You would never know by looking at a local group of ladies that they were or are in the fight of their life. The Derby City Dragons are paddling past breast cancer, using a worldwide competition as their stage.

A gray day didn’t stop the brightly bundled ladies from meeting at the boat dock. They’re used to fighting through drearier days.

“I was diagnosed in October of last year,” Cathy Reynolds said.

“I was first diagnosed in June of 1989,” Beverly McCombs said.

Every Derby City Dragon has a story. “That’s a whole brand new kind of support, a support that only happens when you have a room full of people with breast cancer,” McCombs said.
These are the faces, all ages, all in a different part in their journey. McCombs paces in the front usually. She has stage four metastatic cancer.

“As you can tell, we do a lot of laughing and gabbing, but that’s part of it, just kind of keeps you happy and positive. Everybody just encouraging each other at all times, All times.”

Paddling helps with the physical and mental part.
“The muscles are different. Your movement and your mobility and your range of motion is all different. So, here are these women that are taking huge, powerful strokes and moving a two ton boat down the river, I couldn’t admire them enough,” Reynolds said.

The Derby City Dragons is one of more than 100 breast cancer teams worldwide. They will compete in Florence, Italy next year.

“It’s not just the paddling, it’s the group that you’re with,” McCombs said.

“This is kind of a symbiotic group. We’re bigger than the sum of our parts. I really can’t explain it. I never thought I’d be a part of a support group, but the instant I saw these folks, I was like, ‘yep, I gotta be there,'” Merchant said.

Everyone has a role, paddling in unison through the Ohio River. “At that moment, when everybody’s paddling together, it’s the whole world. That’s all we’re all concentrating on is what we’re all doing together, as a team, in one moment, all those paddles together at one time. That’s it. That’s what we’re all thinking about is that one thing. The rest of the world doesn’t matter.” 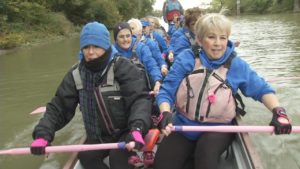 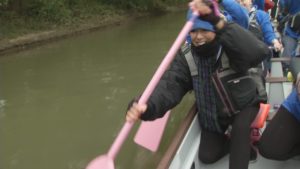 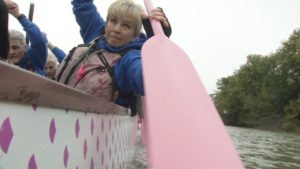 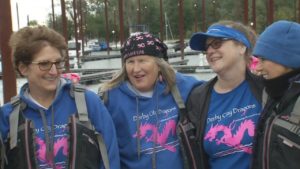 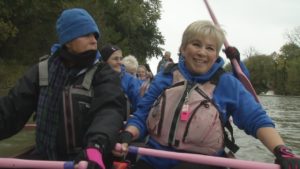